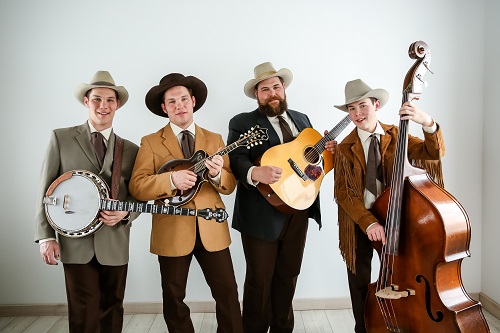 BIOGRAPHY: From southwestern North Dakota, The Waddington Brothers have been performing together since 2004. They have performed with such notable artists as The Kruger Brothers, Ron Block and Bobby Hicks. The Waddington Brothers are a versatile acoustic group with a musical style that ranges from hard driving bluegrass to the mellow sound and dynamic western harmonies reminiscent of Bob Nolan and the Sons of the Pioneers. The Waddington Brothers spent many years touring the United States and Canada with their family (nine of them in all) as the Waddington Family performing Gospel music. Music has been in these men’s blood since early childhood. When Seth was 15 and the twins were 12 they played in the “Frozen Fingers” Bluegrass Festival in Minot, ND with their sister Amanda playing the bass guitar. In 2009 Ethan won second place in the National Bluegrass Banjo Championship in Winfield Kansas. Since then the brothers have performed at Silver Dollar City in Branson, Missouri, they have been featured guests on “Dakota Air, the Radio Show” on Prairie Public Radio as well as performing for North Dakota Governor Jack Dalrymple’s inaugural ball in 2013.

The Bandshell Concert Series is an opportunity for the community to enjoy a free outdoor concert.  Bring a blanket and lawn chairs, sit back and enjoy the sounds of music at its best!  The musical talent includes a wide variety of genres ranging from country western, country rock, gospel, bluegrass, acapella groups, classic folk and more!

Concessions are available each week by Relay for Life.  The Amen Food Pantry will also be collecting perishable food items each week to stock our local food pantry.  Your donations are appreciated!